Crystal Chan and Cesar Agudelo will both be attending All-in, Our union, Our future, a young workers strategy session, on behalf of their Local 4731.  The strategy session will bring together members and staff aged 30 and younger to develop a vision for CUPE to defend and enhance the rights of the next generation of workers. 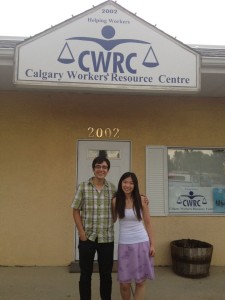 Both Crystal and Cesar work at the Calgary Workers’ Resource Centre, a charitable, non-profit organization that provides representation and advocacy for workers who have employment related issues including Employment Insurance, Employment Standards, Human Rights, Workers’ Compensation, and Canada Pension Plan Disability. Crystal works as a Case Worker and Cesar as the Intake Coordinator.

How did you get involved with CUPE?

Crystal:  I became involved in CUPE with the encouragement of my co-worker.  When I started my position at the Calgary Workers’ Resource Centre, she introduced herself as the Steward and really pushed me to attend the general meetings.  I started becoming very interested in the role of the Union after that and took some courses to learn more about it.  When my co-worker ended her 1 year term as the Steward, she recommended that I put my name forward and was very supportive.

Cesar: At first I participated in the Local’s meeting, but then I got involved in CUPE when I ran for the Recording-Secretary Position of the executive of Local 4731. Given the nature of my work, a lot of which involves providing Union like services to non-unionized workers, I considered it only natural to continue walking the walk and contribute to my own Local.

Why are you attending the strategy session in Montreal?

Crystal:  I genuinely believe that the Union serves an important function.  Not only does it hold employers accountable for their actions so that employees can be treated more fairly, but it also improves the employment standards for non-unionized workplaces as well.  The public perception regarding Unions has steadily become more and more negative and I feel that it is important to engage young workers and educate them on how it is still a relevant and vital institution.

Cesar:  Unions, like any institution, need an infusion of new ideas and energy, the source of which generally comes from young people with passion and vision. The Montreal Convention seems like an excellent forum to network with like minded youth who see the importance of evolving and growing the role of Unions in our society. Also, because of the treatment my clients go through due to the lack of proper protections – protections a union could provide – I think it is imperative to re-energize the Union movement and connect today’s workforce to the benefits Unionization can bring to the workplace, and by extension, communities.

Why do you think it is important to get more young workers involved in CUPE?

Crystal:  The foundation of the Union is solidarity and strength in numbers.  It is absolutely necessary to engage young workers as it is the only way the Union will remain strong.  Without new workers willing to become active in the Union and continue fighting for workers’ rights, the Union will gradually dissolve.

Cesar:  With the advent of the retiring baby boomers and the fluidity of work in today’s market, I believe Unions need to adapt faster and better to the new conditions. They need to in order to continue their invaluable contribution to workers, families and communities. Young workers are the main source of creative ways of responding to the new environment. It seems only natural that we get young people involved and interested in the Union movement, and allow them to modernize and influence the movement’s future.

Anything else you think might be interesting for your profile?

Crystal:  I am getting married in August this year!

Cesar:  My grandparents from both my mom and dad’s side were fervent Unionists who were not afraid of promoting change and innovation in their own Unions. Something must have rubbed off on me.