Gary Kent was elected Diversity Vice-President for CUPE Alberta at our convention in Medicine Hat.

Gary began working for the Regional Municipality of Wood Buffalo in 2009 as a Peace Officer. He became involved in Local 1505 after taking the ‘Introduction to Shop Stewarding’ training in 2011.

In October 2013, Gary attended CUPE’s 50th National Convention in Quebec City, where he was inspired to become more involved in the union.

Gary was born in Nova Scotia and moved to Fort McMurray in 2006, where he resides with his husband of nine years. 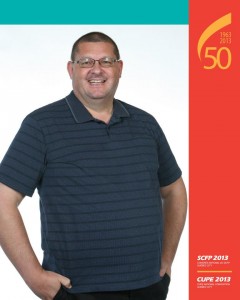