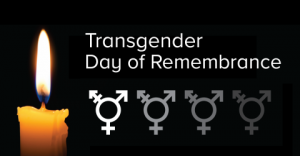 November 20th is the Transgender Day of Remembrance. It is observed around the world in memory of the transgender and transsexual persons who face violence, abuse and discrimination.

According to a 2012 report from Ontario, 43% of Trans people have attempted suicide at least once in their lives.

Trans people are particularly vulnerable to harassment, exclusion and extreme violence on a daily basis, on and off the job.

It is our job as a union to stand up for all human rights and for dignity and security for all people. The struggle for respect for Trans people is part of that effort.