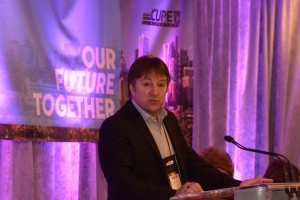 The challenges facing public sector workers and CUPE have never been greater, and CUPE National Secretary Treasurer Charles Fleury says the union has a battle plan ready to face those challenges.

Fleury told convention delegates that while revenues are tight, CUPE is allocating resources with an eye to giving locals the power to make gains at the bargaining table.

“CUPE is a very strong union,” said Fleury.  “In CUPE we know how to mobilize our members and how to resist attacks.”

Fleury praised CUPE workplace stewards as key to a strong union.  “Union Stewards talk with our members and back them up every day,” said Fleury. “We must support and mentor new stewards, we must send them to union education classes, we must tell them why we are fighting to raise every CUPE wage to at least nineteen dollars per hour.  Why we fight to make sure that we have more full-time permanent jobs.  Why we need pensions for every CUPE member.”

Fleury reminded delegates that changes made to the National Strike and Defense Funds at will Increase CUPE’s campaign power, allowing more funds for local, regional, and National campaign initiatives.

“Our priority is always to make sure that the picket lines stay strong and that we win the strike,” said Fleury.  “We hope that this will help our members who are not working the traditional nine-to-five full-time job – mainly our precarious workers.”

Finally, Fleury said that with a large number of new staff, CUPE is investing in training.

“We have increased the funds for the mentoring and trainee rep program,” said Fleury. “This is especially important because now, fifty-four percent of our staff have less than five years on the job.  This is a time of big staff changes.”

“Alone we can only do so much.  But when we work together and support each other, we have the people power and the resources to win many fights.”