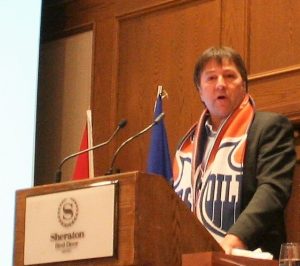 National Secretary Treasurer Charles Fleury told delegates to the CUPE Alberta convention that CUPE needs to fight hard against the rise of precarious work – fortunately, the country’s largest union has the resources to do so.

“Everywhere I go, members tell me, ‘they are cutting our services, privatizing our work, and turning good jobs into part time and casual positions,” said Fleury.

“Here is my message for you today, CUPE has the resources to fight back against all these attacks.”

Saying CUPE members in almost every region face service cuts and concessions, Fleury said it was up to the union to lead the resistance.

In addition to new strategies and policies around bargaining, Fleury said CUPE is ramping up the resources it’s putting into the field, including renewing 11 new temporary staff representatives, a new equality representative, and significant improvements to the strike and defence funds.

“Strike pay will start sooner, the defense fund has more resources, we will put the resources forward we need to protect workers,” said Fleury.