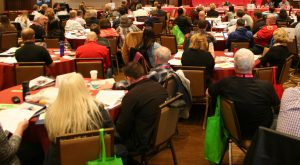 Cake said previous Conservative governments moved debt from government to students and their families by letting tuition and other fees go up by as much as 50% annually.

After the Notley government was elected, the NDP introduced a tuition freeze and increased funding to universities, colleges and trade schools.

“Now students can anticipate what their education will cost,” said Cake.

Cake said that while tuition has increased, and senior administrative salaries have been grossly inflated, the people doing the actual instruction of students have become increasingly marginal.

According to Cake, 50% of students are taught by contract and sessional faculty, and increasingly – sessionals cannot move to tenure track positions.  Tenured staff can cost between $65-$150,000 while contractors make as little as $28,000 per year.

“When a university is selling it’s unspoken promise, that education leads to a better life, we’re not even seeing it among it’s own academic staff,” said Cake.