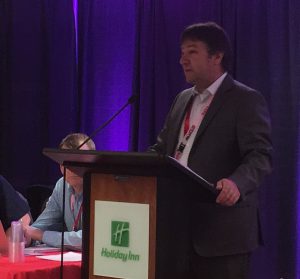 For the first time in years, CUPE Secretary Treasurer Charles Fleury is delivering a good news budget for CUPE National.

But with the growth comes growing pains. Fleury announced a Task Force on staffing to address changes to the organization.

“Since I was elected seven years ago, more than 230 staff have retired,” said Fleury. “Thirty-two percent of our staff now have fewer than five years on the job.”

“You can see why we believe it is now time to do a more in-depth review of our staffing challenges and how we can better support our staff and locals.”

Fleury said the task force would look at issues like the turnover caused by retirement, the challenge of servicing big locals that cover wide geographic areas, and how we handle new, emerging workplace issues as they develop.

Fleury also called upon delegates to work hard to support the re-election of the Alberta NDP Government. While the NDP hasn’t given labour everything we are looking for, they’ve made excellent first steps.

“It’s like a collective agreement,” said Fleury. “You don’t get everything you want the first time, so you keep working on it over a few rounds.”