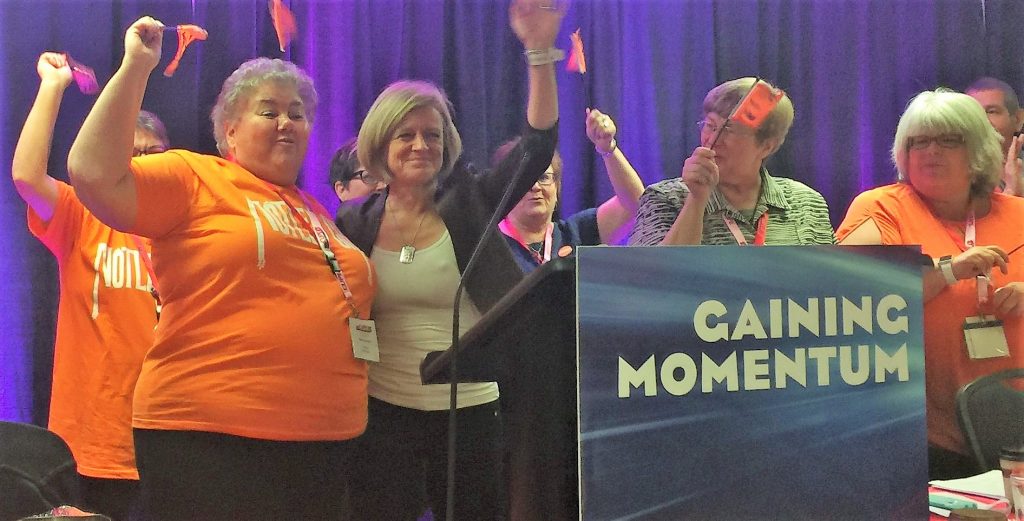 After a rousing intro from CUPE Alberta President Marle Roberts, Notley took to the stage and gave thanks to public sector workers.

“Thank you for always working to make Alberta a better place.”

While giving a spirited defence of her government’s record, Notley vowed that as Alberta’s economy recovers, people from every walk of life will share that prosperity.

“An economic recovery that doesn’t reach everyone is no recovery at all.”

Throughout convention, multiple speakers addressed recent changes to Alberta labour laws and minimum wages.  Notley gave credit to CUPE and the labour movement for those reforms.

“The laws supporting Alberta workers had not seen significant updates in nearly 30 years,” said Notley. “While workers in other provinces benefited from three decades of new protections, Alberta’s workplace laws were still in bellbottoms.”

“Like you, we believe that no working Albertan, should have to stop off at the food bank on their way home. So, because of advice like yours, we set out to become the first province in Canada to have a $15 minimum wage. Friends, this October, that $15 minimum wage takes effect.”

Notley said her government was focused on making life better for working people, but opposition Conservatives wanted her to take the opposite approach and make it worse.

“The decision to support ordinary Albertans through the downturn wasn’t without its critics. They said we were killing the economy. Killing jobs. Killing dreams! You shouldn’t be investing in regular people, you should be giving tax breaks to the rich,” said Notley.

“Well, my friends, we refused. Instead, we put the priorities of all Albertans first.”

“And you know what?  With the measures I mentioned and a whole whack more, our plan is working.  Exports are up. Manufacturing is up. Retail sales, drilling and jobs, all up.

“Last year Alberta created nearly 90,000 new, full-time jobs.  Today, there are 2.3 million Albertans working —the most people working than at any point in our history.”

“Because when you believe in working people and are guided by their hopes and values, good things happen.”

“Alberta has a government that stands firmly on the side of working people,” said Notley. “We’ve got your back.  I know you’ve got ours.”