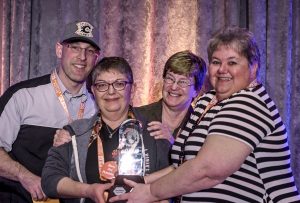 Brenda Reid, CUPE Alberta Area VP for Red Deer, is the recipient of this year’s Equality and Justice Award.

She was given the honour at this year’s CUPE Alberta convention, held in Lethbridge.

Reid was cited for her tireless commitment to fairness and equality, for work that includes division liaison for CUPE Alberta Aboriginal Council and AHEC, president of Local 4733, trustee of CUPE Alberta Central District Council, and a representative for Alberta on the CUPE National Health Care Issues Committee.

Among her many hats, she also supports and promotes union education within the province and her local, and has recently become a member facilitator.

“Sister Reid will go above and beyond to ensure all members are recognized and have a voice,” said CUPE Alberta President Marle Roberts. “She recognizes the importance of young workers and even gave up her spot at the last national convention so that a young worker could go in her place.”