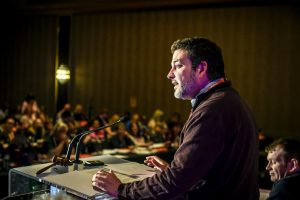 Alberta Federation of Labour President Gil McGowan spent the morning arming convention delegates with information to share with family, friends and neighbours during this election.

McGowan took members through Kenney’s falsehoods, shattering each one as he went. From blaming Alberta’s economic woes on Rachel Notley – when in fact oil prices have dropped in all jurisdictions, not just in Alberta, to declaring the $15 minimum wage a job killer in the face of overwhelming evidence to the contrary, McGowan underscored the importance of re-electing Rachel Notley and the NDP.

Jason Kenney has said he’d cut corporate taxes by 33 per cent to spur investment, but investment is down not because of tax rates or policies but because of low oil prices. “Corporate tax cuts result in less revenue for governments to pay for things that ordinary people rely on like education, health care, and other important public services,” said McGowan.

He told delegates that if they are feeling anxious about oil and gas, their anxiety is justified because Alberta is not experiencing another boom/bust cycle. “We’re witnessing nothing short of a fundamental transformation of the global oil and gas economy that culminates in a move away from fossil fuel.”

He said that sooner or later the world will want less of what Alberta is selling. “These are irrevocable, global and foundational changes beyond the control of any Alberta government, any Canadian government.”

“When Jason Kenney denies that these changes are happening and tells you that we can get by doing business as usual, that’s a lie,” said McGowan. Quoting Wayne Gretsky, McGowan said that you don’t win games by skating to where the puck has been, but to where the puck will be.

The Notley government, on the other hand, is responding to the changing economic landscape by investing in diversification so we don’t have all our economic eggs in one basket, investing in things like infrastructure, education, and public services so that our citizens and our businesses can become more resilient to a changing economy.

“The bottom line is that you don’t prepare for a changing economy by denying change, you do it by preparing for change,” said McGowan.

“The choice is clear, and it’s stark,” said McGowan. On one hand we have a party that supports businesses and one that supports workers and their families.”

He gave delegates five things they could do: vote; talk to friends, neighbours and colleagues; donate; volunteer; and sign up on the AFL site nextalberta.org to get tools to help engage in conversations.

“You don’t have to be a policy expert,” said McGowan. “All you have to do is come with your heart.”