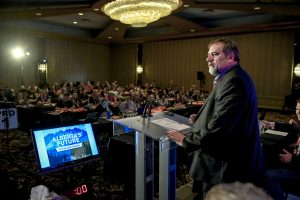 “We have our work cut out for us, nationwide and right here in Alberta,” CUPE National President Mark Hancock told convention delegates Sunday morning.

Hancock stressed the urgency of re-electing Rachel Notley and the Alberta NDP. “Jason Kenney has been very clear he is planning on gutting the services that Alberta families rely on—the services that are provided by our members,” he said. “But it does not have to end up like that.”

Hancock reminded delegates of all Alberta has achieved under Rachel Notley’s leadership, including building new schools and hiring new teachers and education assistants, introducing affordable child care, putting a price on carbon, and cutting child poverty in half.

“Here in Alberta, we have a premier who has done more in four years than most governments could even hope to get done in forty,” he said.

The National President warned of the high stakes in the year ahead, and the wave of right-wing governments hell-bent on undoing the progress made for working people.

Hancock emphasized the need for vigilance when it comes to the slide into Trump-style politics, as well as the false friendship of the Trudeau government. Rounds of “Shame!” echoed in the convention hall when Hancock reminded members of Trudeau bringing down the legislative hammer and forcing CUPW members back to work.

“Working people need their union more than ever,” said Hancock. “They need us to fight for them and to amplify their voice.”

And as the clock ticks down towards the Alberta provincial election in April, and the federal election in October, the National President stressed the need to make our union stronger from within.

He told delegates, “We must re-engage our rank-and-file to become members-in-good-standing as we stand on guard against those threats south of the border making their way north.”

Hancock also proudly welcomed the 3,000 West Jet flight attendants and the thousands of new members who joined CUPE through organizing drives and representation votes over the past year.

The National President concluded by telling delegates why we can be proud to be members of CUPE.

“The story of CUPE is the story of everyday people like you and me,” he said. “Standing together and standing firm in the face of long odds and opponents with deep pockets. It’s the story of doing what’s right.”