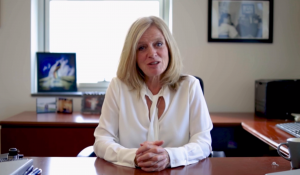 “The Alberta Advantage isn’t under the ground, it’s sitting in your seat.”

Notley said UCP Leader Jason Kenney is attacking the public sector and the people who work in it.

“They’re doubling down on things they explicitly promised NOT to do, like cutting access to mental health, cutting access to prescription drugs for seniors, cutting support for special needs students and going after AISH clients.”

Notley said CUPE members and other front-line workers are being hardest hit by UCP cuts. She noted that municipalities are being starved for resources and are forced to raise taxes, cut wages, cut people or a combination of all three.

“They’re doing all of this so they can pay for their great, big, fat, $4.7 billion dollar handout to profitable corporations,” said Notley. “They’re going after you. All of you who work in health care, in our schools, our municipalities, our post-secondaries, our non-profits.  You are the target of his fiscal reckoning.”

Notley says her party will release an economic plan in the coming weeks. She says her plan must be based on the principal that public services are important and that Alberta cannot get ahead by racing to the bottom with low wages and working conditions.