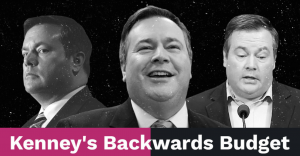 Today, Jason Kenney’s government tabled a budget for the 2021-22 year.

I’d love tell you that the UCP tabled a budget that will create jobs, revitalize the economy and protects the public services we need.

Don’t believe what the Kenney government is saying. This is a budget that cuts services, that has no plan for the economy, and makes working Albertans pay for corporate tax cuts and bad investments.

When you factor in population growth and inflation, today’s budget represents a $4 billion cut to services we count on.

CORPORATE TAX BREAKS – THOSE ARE STILL A GO

Jason Kenney is continuing his $4.7 billion tax cuts for profitable corporations – tax cuts that have yet to produce a single job.

And we now know that Jason Kenney has lost another $900 million on the failed Keystone pipeline (bringing the total lost to $2.4 billion).

The budget has no plan for job creation and no plan for diversification of our economy. We have no plan beyond ‘hoping things get better.’

Kenney isn’t even making a dent in the deficit and debt. I don’t believe this is the time to focus on debt. But for all the pain inflicted by his cuts, Jason Kenney’s deficit is three times higher than the last NDP budget.

CUPE is fighting back. I’m asking you to go to www.backwardsbudget.ca and send a message to the UCP – this budget is a bad plan for Alberta.

Jason Kenney promised Jobs, the economy and pipelines. He promised no cuts to frontline services. He’s broken almost every promise he made.

Nobody voted for this.