CUPE Alberta provides gifts to long serving executive members when they leave the board. President Marle Roberts spoke with Ruth before her passing and she indicated she wanted the value of that gift donated to the Morinville 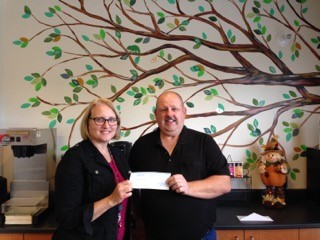 Public Library. As a long time supporter of literacy programs, Ruth was active with her local library.

As per those wishes, CUPE Alberta Vice President David Graham recently presented this gift to Cheryl, the Assistant Manager of the Morinville Public Library in memory of Sister Ruth Shymka.