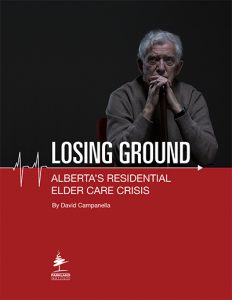 EDMONTON – A union representing 2,600 long term care workers in Alberta is disappointed by the lack of progress being made reforming the province’s system of seniors’ care.

The report, which updates a 2013 report finds that Alberta continues to rely upon private, for-profit providers of seniors’ care, even though all the research indicates public care produces better outcomes.

“Nothing has changed since 2013,” said Roberts. “The system is still in crisis, and if anything, it’s getting worse.”

Roberts said CUPE has repeatedly asked the previous and current Alberta governments to shift the focus to publicly delivered services.

“This study confirms what others have indicated before it – caregivers in public facilities have more time for patients, and deliver better outcomes,” said Roberts.

“We are disappointed that the number of private beds continues to increase, while the number of public beds has dropped,” said Roberts. “We are letting patients down by not offering them the care they need.”