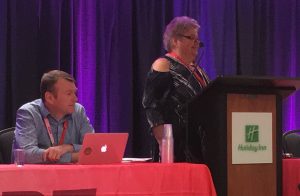 Speaking to delegates in the same room she was elected President of CUPE Alberta seven years ago, Marle Roberts told the hall this was the most positive report she’s ever given.

“We’ve had some struggles this year, but seldom have I seen us progress so far in so short a time,” said Roberts.

Roberts reported that Alberta unions are on the cusp of achieving joint trusteeship of public sector pension plans after decades of lobby attempts and political action.

“Future governments will not be able to change our pension plan without our consent.”

Dramatic improvements to labour laws have been made in the last year under the Notley NDP government making it easier to join a union, improving working conditions and rebuilding the Workers Compensation Board to serve injured workers better.

“This is what happens when you tie union activism with ballot box support and elect a labour friendly government,” said Roberts.

Roberts told delegates CUPE has to work hard to re-elect the NDP in next year’s provincial election and make every effort to prevent Jason Kenney from becoming Premier.

“Jason Kenney wants to limit government spending to the same level as British Columbia. That’s a 20% cut in spending,” said Roberts.  “Look at your table. For every five people, take one of them out. Because that’s what Kenney and the UCP are all about.”

“And to what end? Jason Kenney wants to bring back the flat tax, resulting in huge tax cuts to people who earn over $125,000 per year. “

“It’s been an exciting year. I can’t remember a time in which we made so much progress so quickly.  Let’s do everything we can to keep building this momentum and keeping it going.”