CALGARY – If a provincial election were held today, Albertans would send Jason Kenney and the UCP packing and return to the NDP under Rachel Notley.

That was the finding by an Environics Research poll of 1,205 Albertans taken Nov 10-23. The poll was commissioned by the Canadian Union of Public Employees.

The poll found 47% of decided voters would support Rachel Notley and the NDP (up from 33% in the 2019 election) while only 40% would vote for the re-election of Jason Kenney (down from 54% received in 2019). The NDP leads in the Edmonton and Calgary regions.

When asked if they thought Jason Kenney could be relied upon to tell Albertans the truth, only 33% felt they could trust him. By contrast, Rachel Notley is trusted by 50% of Albertans to be honest.

“Jason Kenney has broken almost every promise he made,” said Gill. “He promised jobs, we’ve lost hundreds of thousands of them.  He promised no cuts to front line services – he’s laid off education and health care workers across the province.”

“Kenney has botched and politicized his response to the COVID pandemic.  He’s said he wants to protect the economy, but our case count is growing so fast it’s hurting our economy deeply.” 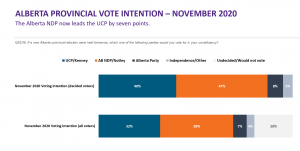 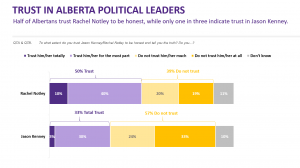