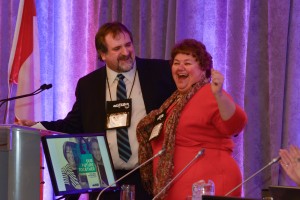 CUPE National President Mark Hancock used his first speech to CUPE Alberta to launch the ‘Year of Health and Safety’ saying “CUPE will never accept workplace violence as ‘just part of the job.’”

“CUPE is renewing our commitment to achieving safer workplaces – for our members and for all workers, in Canada and around the globe.

Hancock remembered the lives of CUPE members and other workers killed on the job in the last year, and spoke about the death of four workers in 2009 who fell off a scaffolding outside a Toronto apartment building because they were not properly secured.  Because of a bill passed in 2004, the project manager was sentenced to three and a half years in jail.

It’s not okay for families to lose their loved ones just because they went to work.

“It took 11 years, but with this sentence there is finally a clear message to the bosses,” said Hancock, “You kill a worker, you will be held responsible. You will go to jail. Full stop.”

“This move wasn’t without controversy. But it was the right thing to do, and I thank Premier Rachel Notley and her NDP government for showing the leadership and courage to take a stand for the health and safety of all workers.”

Hancock went further with his praise for the Notley government, saying last year’s Alberta election ‘has shown the rest of the country what was possible.”

“The task ahead for Premier Notley and her government is quite frankly daunting,” said Hancock. “Four decades of Conservative rule cannot be fixed overnight.”

Hancock also had words for Alberta’s opposition parties. “The right-wing is working itself into a frenzy calling for wage freezes, privatization of public services, and the cutting of thousands of public sector jobs,” said Hancock.  “They argue that Alberta can shrink its way into more prosperous times. They are wrong.”

“We know better. We know that freezing wages and cutting public services isn’t the right answer in a challenging economy.”

“We must help Premier Notley protect and strengthen our public services, to help all Albertans get through this economic downturn.  We must help her and her government diversify the economy so it is not so vulnerable to the boom and crashes of the oil and gas industry.”