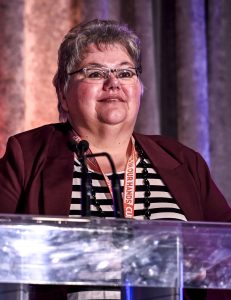 “I’m proud of the progress we’ve made over the last eight years,” said Roberts. “And I’m humbled and grateful for the support and friendship you’ve given me over that time.”

She talked about significant changes for workers in the second half of her term, with the election of an NDP government in Alberta. “Since the Notley government was elected in 2015, we’ve seen improvements for workers, for parents, for patients in hospitals, and for all Albertans,” said Roberts.

Roberts told delegates that the Notley government has made 257 legislative and Labour Relations improvements, citing pension changes as being “huge” for CUPE members. Agovernment can no longer simply pass an order in council to wipe out or erode pension plans, as the Conservatives tried to do in 2013.

March 1, 2019 was ‘Pension Freedom Day’ – the date CUPE members’ pension plan legally became jointly run. This means that changes to the pension plan have to be negotiated between the government and all the representatives of workers in the plan, so CUPE has a veto over any future changes.

Roberts welcomed CUPE 4070 delegate, Kruti Sutaria, one of 3,100 Westjet employees who voted to join CUPE last fall.“Welcome WestJet! Together we are stronger. Welcome to the family!”

Comparing Conservative Jason Kenney’s promises and approaches to public services with those of Rachel Notley and the NDP government, Roberts told delegates that CUPE members need to mobilize and take action.

Roberts closed by telling delegates, “Never stop fighting for a better province, for better lives for working people, and for everything that you do for your members.”

“It has been an honour to be part of this great union and lead you. The work we do makes this province the powerhouse it is.”