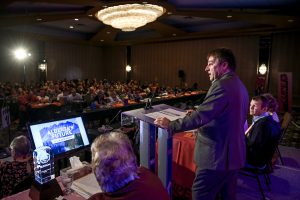 In his address to CUPE Alberta convention delegates, Fleury said CUPE’s latest budget included seventeen new staff positions across the country to handle growth in membership and workload. To date fourteen permanent jobs have been posted, including one new servicing representative in Calgary.

“Since I was elected in 2011, more than two hundred and sixty-five staff retired,” said Fleury. “Thirty-four percent of our staff now have fewer than five years on the job.”

Fleury also announced a new national recruitment plan for staff, including more training, guidance and orientation so they can better support locals. He says members can expect to hear more about the program in the months ahead.

“I think the next decade will be all about developing new staff and new leaders,” said Fleury. “It’s a challenge, but it will also bring lots of new energy to CUPE.”

Fleury also mentioned other important investments CUPE National made last year, including over $314,000 in funding for direct campaign support in Alberta. Cost shares totaling $68,000 included campaigns on pensions and political action in the province.

With Albertans now heading to the polls on April 16, Fleury called upon delegates to work hard to support the re-election of Rachel Notley and the Alberta NDP Government.

“Alberta’s future really is in our hands,” said Fleury. “That’s why CUPE Alberta will campaign to re-elect Rachel and the NDP’s worker-friendly government. We won’t stop until the last vote is in the ballot box.”