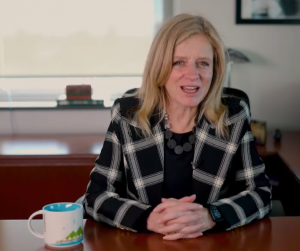 The Leader of Alberta’s NDP used her address to CUPE Alberta’s annual convention to outline some of her plans should she be elected Premier in next year’s expected election.

Rachel Notley promised a government more in tune with the values of Albertans and more respectful of front-line workers.

“After three years of United Conservative scandals and blunders, three years of disrespect, distrust and indifference, we are closer than ever to having a government that stands up for families and actually has the backs of working people,” said Notley.

Notley outlined her plans for K-12 education, of particular interest to CUPE delegates working in that sector. Notley pledged to support children from their earliest learning up to higher education and committed to end the chaos of the last three years.

“We will ensure children have a modern curriculum taught in smaller classrooms.”

“I have a message for Jason Kenney,” said Notley. “CUPE members are better health care, in nursing home rooms, in operating rooms, and in laundry rooms.”

“You deserve a government that respects you for the frontline workers you are.”

Notley promised to reinvest in our public health care system by expanding surgical capacity in the public system, increasing access in rural communities, and addressing backlogs.

“No chaos. No big changes. Just common-sense care,” said Notley. “No more cuts that make your jobs harder or jeopardize patient care, and no more reckless pursuit of privatization.”