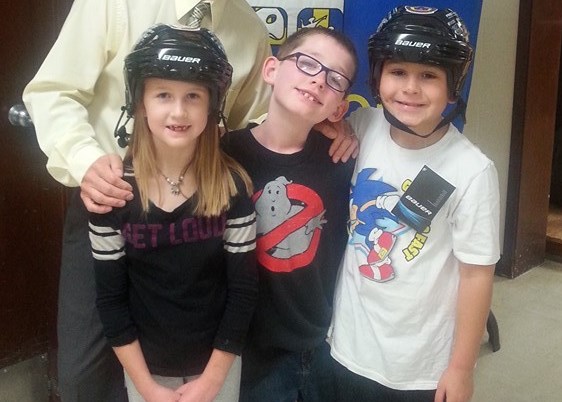 MEDICINE HAT – Like most CUPE locals in the K-12 sector, CUPE 829 members help kids every day. But this local, which represents staff at four school districts in the Medicine Hat area, decided to go a little further.

CUPE 829 President Sharon Stolz explains, “We wanted to do more, we wanted to give a little back.”
Since 2014 the local has started a fund to contribute to children in the schools and the community. They have purchased 130 helmets for use in the schools – all with a ‘donated by CUPE 829’ sticker. The Local has also started paying for the sharpening of school owned ice skates.

In an effort to get students, parents and teachers into the spirit, the Local has started putting collection bins in all schools each November to collect pajamas for the women and children of Phoenix Safe House – a local womens’ shelter.

Stolz said the local started its efforts with a $5,000 contribution from CUPE Alberta’s “I’m on your side” campaign fund. The Local is adding $100 per month to the campaign and allows members to make contributions if they wish. Some members waive receiving flowers for the loss of a family member in lieu of a donation to the fund.

Next up for CUPE 829? Stolz wants to do something for older kids at risk. She notes that McMann Youth Services provides cooking lessons for junior and senior high kids from less functional homes. She wants the local to contribute money to that program for groceries. Teach cooking skills to kids who come from difficult homes.