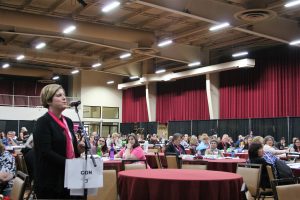 eau got involved with CUPE almost as soon as she started working at Keyano College in Fort McMurray in 2003 because she wanted the extra challenge. Now, in 2017, Comeau is the recently-elected president of Local 2157 – and is attending her very first CUPE convention.

Her first thoughts? “I’m impressed with how fired up I am!” she says. “Convention is lighting a fire in me that I didn’t know was there.”

Fort McMurray is facing a lot of challenges right now, but Comeau looks at her first convention experience as something to bring home and use to inspire members.

Comeau says she was inspired to get involved with her union because she saw the positive effects they had in her community. “Unions don’t just impact unionized workforces – they impact the whole workforce.” When Comeau worked in the private sector, she noticed how her company set its standards to match the local unionized workforces in order to retain talent.

To Comeau, being engaged in her union means getting involved in the community, making connections outside her own workplace, and spearheading fights for fairness for workers and the whole community. Unions serve a crucial role for their members, but it doesn’t stop there.

“Unions are for all workers,” she says. “We’re all in this together.”