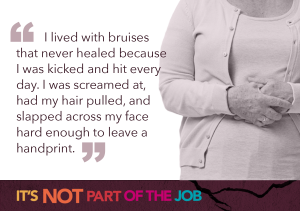 Whether you work in schools, hospitals, social services or any other public service across Alberta, a growing number of CUPE members have something in common: violence in the workplace has affected them or one of their colleagues.

But violence should never be “just part of the job,” in public services or anywhere else. That’s why CUPE Alberta’s Equality and Justice Committee is launching its new anti-violence campaign at the 2019 CUPE Alberta Convention in Lethbridge.

“We hope this campaign brings more attention to the everyday experiences of our members,” says committee co-chair Scott Cush. “They need to be heard and the silence surrounding this issue needs to be broken.”

The campaign invites members to share their own stories of violence in the workplace and let other members know they aren’t alone. It’s also an opportunity to learn from members’ insights and better understand the depth and breadth of this issue.

The campaign also builds on CUPE National’s response to violence in the workplace by connecting members with practical tools for raising awareness and addressing workplace violence, including key resources on recent changes to Alberta’s Occupational Health and Safety Act.

Have you been affected by violence in the workplace? Take action, tell your story and find resources to help, visit alberta.cupe.ca/antiviolence.