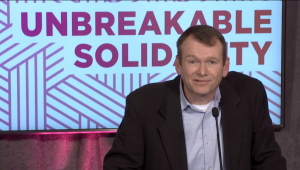 Gill took office only a few weeks before Jason Kenney was elected. Shortly after, the new Premier started a campaign of cutbacks and fights with working people.

“For four years, Marle Roberts got to report progress union members were making,” said Gill. “That is not my fate. Marle got out before things got…interesting.”

Gill said the threat posed by Jason Kenney is far worse than anything faced by CUPE in the past.

“Never before have we had a government so committed to breaking unions and benefiting the rich. Jason Kenney and the UCP are a threat to working people, to health care, to education and to a civilized society. If we do not slow down his agenda and defeat him, Alberta will never be the same.”

“On every issue, he’s delivered the exact opposite.”

According to Gill, Jason Kenney promised his corporate tax cut would create 50,000 new jobs. Instead, Alberta lost 50,000 jobs before the pandemic and over 200,000 more since. Gill called Bill 32 an attempt to “tie us up in paperwork, fine us and even jail us if we speak our minds.”

“No ideological, right wing-troll government is going to stop CUPE.”

Gill outlined the work done to fight Bill 32 and the Kenney government. And he called on activists to do even more.

“The challenges in the coming year are not small. They feel daunting. But no one has to face them alone. We are 40,000 strong in Alberta. We are 700,000 strong in Canada.”

“I ask of you what I commit of myself – do what you can. Do your part. Take care of our fellow members. Don’t take any abuse from our government.