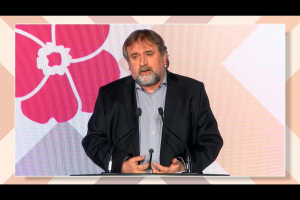 National President Mark Hancock warned delegates that as the pandemic winds down, right-wing forces are working to exploit peoples’ frustrations and use that to dismantle public services.

“Austerity for them is more than just a way to balance the books. It’s how they create scarcity and convince folks there’ll never be enough to go around.  It’s how they convince people they have to fight each other for scraps, instead of fighting for the wealthiest to pay their fair share.”

Hancock said he was proud of the efforts of CUPE members in New Brunswick, Manitoba and others who have walked picket lines to fight conservative governments and encouraged Alberta delegates to fight hard against the UCP government.

“Winning the fight against austerity doesn’t just happen because we want it to. Whether it’s your local, your sector, or your sector province-wide, we need to get organized, we need to coordinate, and we need to support each other.”

And even if Jason Kenney is removed from the Premier’s office, Hancock asked delegates to keep pushing for a better government.

“Whether UCP members give Kenney the boot or not, it isn’t going to be enough to replace him with a new face. We need a new party in power.”